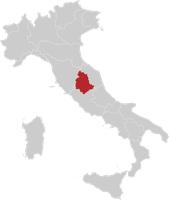 Tenuta Le Velette
An intermingling of vines with their roots in the tufo rock and their vision turned to a future of wine.
The hill on which the Le Velette estate is situated, to the east of the rock on which stands Orvieto, has always been a point of great agricultural and strategic interest in the course of its three thousand year history. The position, controlling a good part of the valley of Orvieto, the volcanic terrain exposed to the sun from dawn till dusk, and the special microclimate with significant thermal swings between night and day have always been its good fortune. The first to see its great wine-growing potential were the Etruscans, the people who had already in the 7th century B.C. imported the vine from the Greeks. They certainly used the hill as a rural settlement for its cultivation and dug grottoes in the tufo rock, (just as we still do today), which offered excellent conditions for wine conservation. During Roman times, the hillside kept its wine-making role but developed significantly also as a strategic check point: right in the middle of the present estate, where Villa Felici stands today, a control tower was built and a resting-place for travellers, which led to significant development in the area. After a difficult period of barbarian and Longobard invasions, the area regained great importance as papal state land. In this period the Etruscan grottoes were extended and became a safe refuge and place of worship for the first monks who settled there soon after. With the advent of feudalism, the area passed into the hands of the Negroni counts, feudal lords of a nearby village, preserving its wine-making function for centuries before being given in endowment to a monastic order by a descendent who had become an abbot.
At the unification of Italy everything went to the city of Orvieto, which sold the estate to the Felici family. And so began the first experimentations in the vineyard and the cellar which led in very few years to the production of excellent wines, as is testified by the medals won in that period in Roman oenological competitions. The estate's wine went into commerce in the new-born Italy.

LUNATO 2017 ORVIETO DOC CLASSICO...
Tenuta Le Velette
Produced from the grapes of the oldest vineyards, which are rich in energy but with a low yield, Lunato represents the best in terms of quality and local character that can be got from this soil. Str…
See More Request a Sample