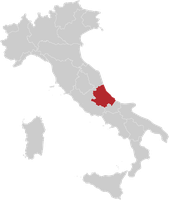 Paniere D'Abruzzo
It was 7 April 1971 when they presented themselves in L'Aquila, in front of the notary doc. Carlo Cricchi as many as 46 small saffron producers from different villages of the Navelli Plateau, united by the idea of ​​cooperation set up by our Silvio Salvatore Sarra: the Cooperative “Altopiano di Navelli” was born there. The union of producers in the cooperative became necessary because, in those years, the price of saffron had collapsed and there was no market demand.

Their Abruzzo red gold from L'Aquila began to be known all over the world, also because this specific saffron is unsurpassed as a quality, so much so that in 1989 a worldwide commission of experts gave it the primacy in the world, followed in 1991 by a further recognition for the Cooperative with "the Golden Atom". The long list of awards then found its peak in 2005, when the European Union recognized the DOP brand to our L'Aquila Saffron.
Contact Producer