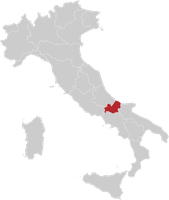 CANTINE CATABBO
The Catabbo’s cellars were created by Vincenzo’s intuition, who at the time, in the ’90s, he was engaged in the wholesale trade of cereals and grains; a job which led him to travel a lot, both in Italy and abroad, and to compete with different realities.

As soon as he purchased his first lands, located on the slopes of San Martino in Pensilis, he immediately realized they were not very suitable for grain cultivation, mainly due to the many stones … (hence the name of Contrada Petriera given to the extension on which stands the first Catabbo companies).

On a day like any other, he found himself talking to an elder peasant, who jealously guarded a few maps of the rare Tintilia vine.

It was 1997 when for fun, it was planted 1/2 hectare in the Contrada Petriera!