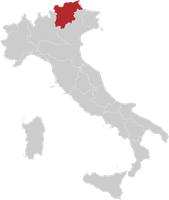 Azienda Agricola Balter Snc Di Nicola Balter - Società Agricola
The 16th century round tower was built both as a lookout and to facilitate communication between the castles. In the following years a second, square, tower was added. To create a military structure, the two towers were linked. As time went by, a barn, a stable and a vegetable garden were added, thus transforming the structure in a sharecropping.
In 1872 the ancestor Francesco Balter bought the property, that was then passed down to brothers Attilio and Francesco and was first renovated after the first world war (silver medal of the Ministry of Agriculture). After the second world war, Francesco the third, who had a degree in Agricultural Sciences, renovated the property a second time, since during the war it was used as a flack by German forces, due to his strategic position above the Vallagarina valley, in that period a part of Austria.
In 1949 Francesco married Lucia Colombo and, due to family reasons, took on a management role in a carpet, rugs, and flooring business, while its passion for agriculture was relegated to running the family business.
In 1965, after the property was transformed from sharecropping to a direct-management company, the vines were planted according to geometrical and technical criteria, in order to create a vineyard described as “garden”, whose grapes were sold or conferred to several wineries. From that moment wine cultivation has steadily improved.
Contact Producer