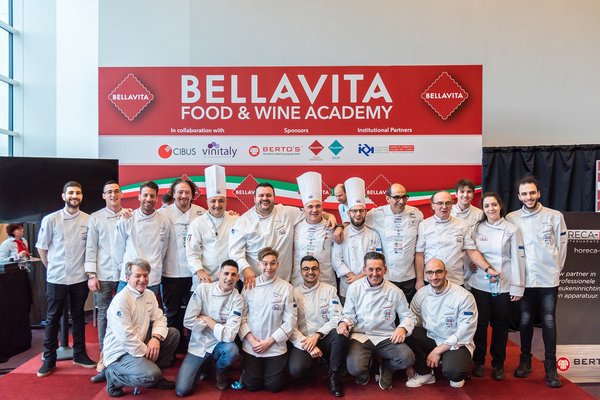 Bellavita is proud to partner with the Federazione Italiana Cuochi (the Association of Italian Chefs) in the Netherlands, for Bellavita Expo Amsterdam 2020.

Some of the most esteemed Italian chefs working in the Netherlands will join the Expo this year to lend their expertise to both the culinary masterclass programme, and the Bellavita Awards VIP Judge panel . Chefs from the association will host four varied masterclasses across the three day of the Expo, extolling the virtues of Italian cuisine for guests.

Chefs taking to the stage for masterclasses this year include: Giovanni D’Apice , who will be on stage on Monday 13 at 12:30, previewing his upcoming cookbook Risotto and demonstrating three Italian rice recipes featured within; Mario Loina presenting on Monday 13 at 15:00 classic Italian pasta recipes with a modern twist, emphasising the traditionality and timeless simplicity of these dishes, easily adaptable to modern trends; Pasquale Carfora presenting on Wednesday 15 at 11.15 gourmet international dishes built on a foundation of versatile and internationally minded Mediterranean ingredients; and Monique Troc-Posset and Dario Troc , who will lead an unmissable food and wine paring masterclass on Wednesday 15 at 12.45 on the health benefits and varied components of the Mediterranean diet.

These chefs are just a few of the 40 from the Federazione will be part of the Bellavita VIP Jury, joining the other chefs, sommeliers, importers and industry buyers that make up the prestigious panel. As well as judging all the products on display this year, they will be responsible for awarding a dedicated prize to the best Italian product of the show for chefs in the restaurant business – the Chefs’ Choice Award .

Giovanni D’Apice is an acclaimed chef and culinary expert, and author of the bestselling Pasta: Il Primo Piatto and his upcoming cookbook, Risotto . Originally from Naples, he is among the Netherland’s leading authorities on the art of pasta making.

Mario Loina is executive chef at the five-star Hyatt Regency Amsterdam hotel, and board member of the Federazione. Formerly a lecturer for Gambero Rosso in Italy, he has collaborated with the three Michelin star Spanish restaurant, El Cellar de Can Roca, voted the World’s Best Restaurant by San Pellegrino in 2013 and 2015.

Pasquale Carfora is executive sous chef of the brand-new Nhow Hotel in Amsterdam, having previously worked at La Pergola under Heinz Beck, and at the three Michelin Star White Room at the Grand Hotel Krasnapolsky in Amsterdam under Jacop Jaan. In 2018, he was shortlisted by San Pellegrino as one of the Benelux’s Young Chefs to watch.

Monique Troc-Posset and Dario Troc are the head chef and sommelier, respectively, of Schatull, in Vaals, named the best Italian restaurant in the Netherlands in 2015 and 2018.

Founded in 1968, the Federazione Italiana Cuochi boasts 20,000 members across the world , at all levels of the restaurant and hospitality industry, including professional chefs, chefs patron, restaurateurs, teachers and students. Last year, the Netherlands branch formed from the Belgian branch, and has since incorporated over 100 affiliates.

To take part in these masterclasses, plus the many more taking place at Bellavita Expo Amsterdam (13-15 January 2020, at the RAI Amsterdam), register for your FREE ticket here .