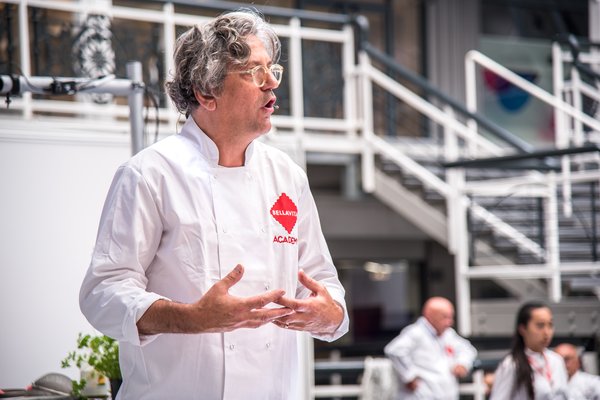 Giorgio Locatelli is a Michelin Star chef, working on the London dining scene since 1986. In 2002, he opened Locanda Locatelli, Marylebone, the first Italian restaurant in the UK to be awarded a Michelin Star. He will be join Bellavita Expo London 2019 for a culinary masterclass on Thursday 7, from 12:30 to 13:15 , walking guests through making his chestnut tagliatelle with wild mushrooms.

Giorgio sat down with us for a discussion about his life and career, and what has brought him back to Bellavita Expo once again.

Since you first arrived in London over 30 years ago to work at the prestigious Savoy Hotel, what changes in the capital’s food scene have stood out most to you?
For me, since I arrived here in London 30 years ago, the biggest switch has been the importance of every other cuisine but the French, which was the one rule at that point – the British idea of food, especially in high end restaurants, and this has changed completely in the last thirty years, the importance of all these different types of cuisine, and they made a great influence, and a new sort of identity that is British cuisine, and obviously Italian food has come a long way from those times, from the food you find in the restaurants to the supermarkets – the accessibility to very good, high quality Italian food has been a revolution in the last thirty years.

You have previously worked in restaurants in your native Italy, France and Switzerland – what is it that has kept you living and working in the UK?
I never worked in the UK, I worked in London, and it was London and its multiculturality for me that made it. It’s a city where if you had enough determination, strength and courage, you would be able to achieve what you want, and that’s true - to me, everything is possible in London.

Looking forward now, in your opinion, what are the biggest culinary trends that are going to dominate in the London scene in the near future?
That’s a question I don’t know how to answer, because every time I do, I get so much wrong – ten years ago I kept saying “oh the meat, we’ll have to stop eating meat,” there will be a surge of restaurants that don’t sell meat, and I’ve been proved wrong – meat is still going really strong. I think vegan is something that, especially for the young people, is very well established, and more responsibility of eating less meat but very good quality meat, where the welfare of the animal is taken care of, and the whole process of getting the meat to your table – it will make it a little more expensive, but obviously reflected in the quality.

Given the variety of international cuisines represented in London, do you think there is the potential for Italian produce to be used other cuisines?
Obviously, yes, this is one of the great capacities of Italian produce, to really enter the cuisine of a country, and become a staple, maybe even transform it – the English have Spaghetti Bolognese, which we don’t eat in Italy, but here, it’s almost a cultural dish. So accessibility is not something to look upon as a bad thing, and if an ingredient is used in the wrong way for the first few times that people use it, that’s all down to education, passing down the right message, and showing people what to do with these ingredients, but there is a great stage here, especially for high quality ingredients.

You once famously had an incident with some customers who refused to pay their bill at Locanda Locatelli, due to the price of white truffles you had served them – do you think that there needs to be a greater emphasis on education for consumers about the source and value of ingredients?
That was the famous truffle kerfuffle , as the Daily Mail reported. I thought that was brilliant, the best piece of publicity – that was someone’s birthday, and we managed to spoil it, so the next year, we sent her the biggest bunch of flowers and said “thank you for the great piece of publicity… I hope we don’t manage to spoil this year.” It was very strange, but it never happened again.
The main thing is not to teach with the attitude that you are actually teaching – it’s about convincing. Education is a big word to use for food, and to educate someone, you are hammering stuff into their brain – to convince someone of something, you just have to give them it to eat, and that’s very easy, especially if they’re hungry.
When a product has a story, don’t be afraid to tell that story. If a particularity about that ingredient can be told, it’s very important that you tell it – we train our waiters not to give a lesson if a customer asks a question, but to give the right answers for the provenance and the methods of production.

Free-from ingredients and vegan alternatives are very important to you, both in your professional and personal life – do you think Italian producers and distributors are adapting well to the increasing demand from consumers for these ingredients?
Yes and no. Some regions seem to be much more switched on, some a bit less. But obviously this is a slice of the market that is up for grabs, and no one can tell how big it’s going to be, but the projections are very good. Some responsibility on education on what we eat is very important, and respect not just for what you buy, but for everybody involved in the production – fair food is very important to me.
Vegan and vegetarian is getting more attention, and we like to have people like that because it’s a little more challenging, as they know what they want to eat. In my personal life, yes, it’s very important for me – I’ve got a daughter with 600 different allergies – and for my team in the kitchen, but it’s what keeps a chef going, the fact that I have to find new things all the time.

Part 2 of our interview with Giorgio can be found here .