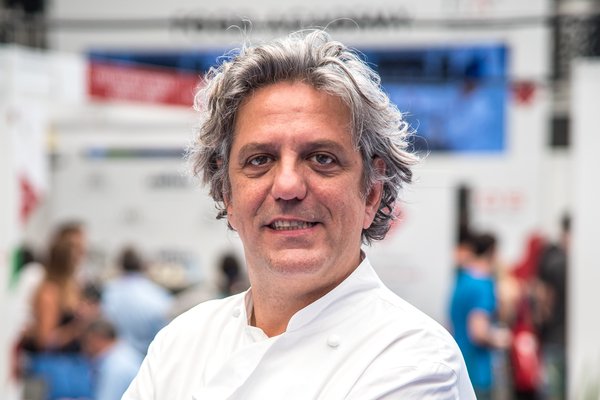 Giorgio Locatelli is a Michelin Star chef, working on the London dining scene since 1986. In 2002, he opened Locanda Locatelli, Marylebone, the first Italian restaurant in the UK to be awarded a Michelin Star. He will join Bellavita Expo London 2019 for a culinary masterclass on Thursday 7, from 12:30 to 13:15 , walking guests through making his chestnut tagliatelle with wild mushrooms.

Giorgio sat down with us for a discussion about his life and career, and what has brought him back to Bellavita Expo once again.

As a chef who obviously values access to fresh, quality Italian produce, what do you think of Bellavita’s work steering producers into the UK market?

I think it’s a very important job, especially as we don’t know what is going on with this Brexit, it’s something that’s going to be hanging over us in a very bad way, but you can see the actual understanding of Italian produce, and getting the story from the producer to distributor to customer, and so on – the work of Bellavita is essential. And the way it’s structured really gives smaller producers that would not have the possibility, or find it difficult, to enter such a stage. There’s not a buyer from England who are going to go see some of the producers down there, to bring them here, to their door, is a very important thing.

This year at Bellavita Expo, there will be a section dedicated to private label products – what are your thoughts on such products? Do you make use of private label in your own restaurants?
If you can make sure the quality of what you’re making is to the same standard all the time, then a private label is a very good thing to have. I’ve never done anything like that – I’ve been asked to put my name on things, but it wasn’t what I wanted to do. I remember talking to Loyd Grossman, who used to do those sauces, and they were really good. The combination of his name, his celebrity, and the quality made it an incredible product, and he was top of the market.
If someone puts their name behind a lot of products, they like to believe that, say, Jamie Oliver went to Italy and bought the tomatoes and made the sauce and put it in the tin himself, that’s what they want to believe, so sometimes there’s a bit of a lie, because obviously it’s not true, but if it helps selling high quality ingredients because it’s attached to a name, then I don’t have anything contrary to that.

Given that you this year opened a new restaurant in Cyprus, what do you think of the more diverse range of Mediterranean exhibitors and products on display at Bellavita Expo this year?
It cannot be bad for Italy to be a part of the Mediterranean basin. It’s very trendy – look at the success of Yotam Ottolenghi and that type of cuisine – so the association with this whole Mediterranean scene, it is still our cuisine, that has a lot in common with that, and there’s different influences region by region from the North to the South – the Italians from the north have the German and French influence, while you go down to Sicily and you have the influence from North Africa – that all makes Italy so interesting, and to be part of this Mediterranean wave is a good thing for Italian cuisine.

You have attended a number of Bellavita Expo events since it began six years ago –what do you think it is that Bellavita offers most to guests?
In one morning, you’re tasting and looking at products that would take you three months to find if you go to Italy, and go to see each one where they are, so it’s a great shortcut to what’s hot in Italy now and what’s going to be the next important thing coming up, and I try to get all my chefs during the event to go there, as well as the waiters to go and have a look, as it’s very important to open their minds.
It is a very important stage, and Bellavita has done very well – it’s not too crazy busy, the people have time to talk to you, and you actually have the producer, not some agent or representative, to talk to, and that makes a great difference. When someone talks about produce that they’ve dedicated their life to, there’s always a value to that.

What advice would you most like to offer to exhibitors showcasing their products at this year’s event?
To be truthful, to be real, to have a story for the people, and to bring some of the people who are really involved in the production, that have this insight and can talk about it. You are not just selling a product, you are selling an idea, a dream, a sense of belonging. To have some pretty girl at your stall, that’s not helpful at all – please bring the lady who pulls the tagliatelle, or the guy who kills the wild boar, the guys on the ground, that’s very important.
The producer is two or three steps behind, before the transformation of the produce, they don’t see that happening – we see it happening every day, because we are in complete contact with our clients. From what we can see on the ground with the people we touch every day with our food, there is a hunger to understand.

As a speaker, what are you most looking forward to share with guests at Bellavita Expo?
I’m doing a recipe that is very Italian in a way, but very British in another way, using mushrooms found in England rather than Italy, and the use of produce like the chestnut flour really shows the understanding of Italian cuisine. What I want everyone to understand is: you’ve got to believe that people have the capacity to understand your food. Lots of the time people say “what do they understand? Oh, they understand f*ck all about it, they don’t want to know” – No, they really want to know, they really want to understand.
And this dish is so representative of Locanda, to the melting pot of culture that happens in London, and the ingredients that come together to produce something that the people will think is highly Italian, but in reality, what makes it Italian is that we make it in our restaurant. Using the tradition, the story around it to make a dish, this is very important, and the interaction with people – the dish is more than just food, there is emotion, there is something that people can understand behind it.