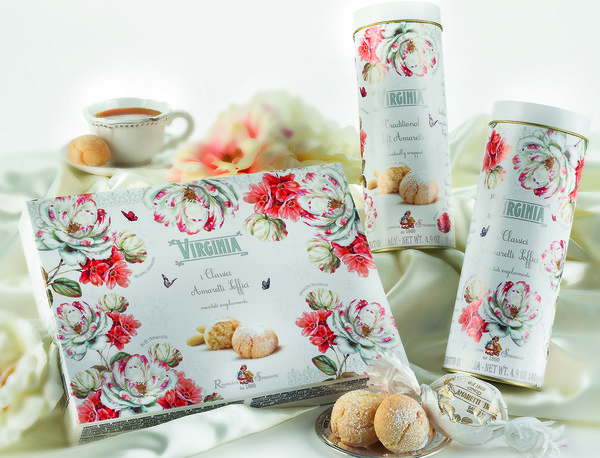 The staff of Amaretti Virginia have been dedicating their expertise since 1860, to the creation of bespoke and artisan desserts and pastries, synonymous with the delicate flavours of amaretti and have developed an exquisite and elegant range of sweet specialities. The unmistakable flavours of almonds are complimented by varying nuances to suit different palates and occasions from the zest of citrus, the richness of chocolate and hazelnut or the delicate undertones of floral scents. Each item is packaged to reflect on traditions past, to reflect the superior quality of their traditional and traditionally inspired recipes. Their latest range features a selection of individually wrapped small sweets, which can be savoured along with espressos or a cappuccino, extending their production line to the catering and restaurant industries as well as those breaking for afternoon tea.

Recognised since its infancy, the company has been awarded time and time again for the precision and skill that goes into the production of each item, often allowing the work of Amaretti Virginia to stand out against its competition. Examples include the award ceremony during the Colombiadi of 1892 in Genoa, in which the company were awarded with certificates of excellence and the first class medal. International acknowledgement was first obtained in Paris in 1911, which awarded the brand the winning gold medal and special honours, where the delicate flavors conquered a rigorously selective jury.

Amaretti Virginia will be attending Bellavita Expo Chicago with a selection of their amaretti, panettoni and other pastries.